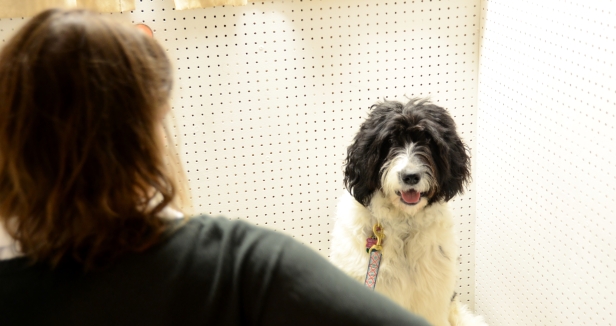 For centuries, researchers have been fascinated by the evolution and development of language. How did humans develop the ability to utilize complex language when no other species have? What is it that makes humans unique? One possibility is that the location of language processing in the left hemisphere of our brains allows for the development of specialized areas that deal with various aspects of auditory input 1. Each area can simultaneously process one part of the input and then combine the results after computation. This would be much faster than one area trying to do several different computations, one after another.

If we find evidence for lateralized language processing in other animals, it would indicate that this is not what makes human language unique.

One way to test the idea that lateralization is what makes human language use unique is to behaviorally explore auditory processing in other animals. If we find evidence for lateralized language processing in other animals, it would indicate that this is not what makes human language unique. Dogs are especially good subjects, since they can discriminate among different human vocal productions (most pet dogs know a few different obedience commands), and they pay attention and seek human praise as a reward. On a methodological level, this means they don’t have to be restrained or subjected to any serious discomfort during studies to get them to perform tasks, unlike some other animal models2. On a more interesting psychological level, dogs can maintain joint attention with humans, meaning that they follow our eye gaze and gestures in order to pay attention to whatever we are focusing on3. This is similar to the way that babies interact with adults. Even great apes, our closest ancestors, fail to maintain joint attention. Dogs likely do this because they have co-evolved with humans over many hundreds of years; this makes them a great model to explore what we think may be human-exclusive behavior3.

Some of the first evidence for lateralization of language in non-humans comes from a behavioral task in which dogs were brought into the lab and placed in a room with two speakers, one on either side of the room. The dogs listened to their owners’ voice saying “come on, then!” in one of two formats: either with all the emotion digitally stripped out to create a monotone with clear linguistic content, or with the speech garbled but the emotional pitch contours intact. The experimenters found that the dogs preferred to turn their head to the right for the linguistic content and to the left for emotional content, which would correspond to the left brain and right brain, respectively. This provides indirect evidence of a left hemispheric bias for linguistic input and a right hemispheric bias for prosodic input in dogs3.

Through brain imaging, experimenters found that not only do dogs have a left hemispheric bias for speech, but they also demonstrate a graded praise response depending on the utterance’s congruity with the prosody used to speak it. While in the fMRI, the dogs heard either a meaningful praise word or a neutral word, and this word was said either in a praising tone or a neutral tone2. In this particular brain imaging tool, a movement of as little as three millimeters from side to side can lead to inaccurate data, so the experimenters used dogs who were carefully trained to sit very still in the scanner. The experimenters expected that dogs would recognize the meanings of the praise words and praise tones, and also that neural responses would show a left-hemisphere bias for the meaningful praise words but not the neutral unknown words. When the experimenters looked at reward areas in the brain, they saw that praise words said in a praising tone led to the greatest activation in the reward areas, with smaller activation for the praise word alone with neutral tone and the praise tone alone with a neutral word. This result confirms that dogs comprehend the familiar praise words and happy-sounding praise tones, and respond with excitement. For meaningful praise words, dogs show overall greater activation in the left hemisphere as compared with neutral words, with no mediating effect of tone. This indicates that dogs may have linguistic representations for words that they have heard before and have linked to a specific meaning, like walk. 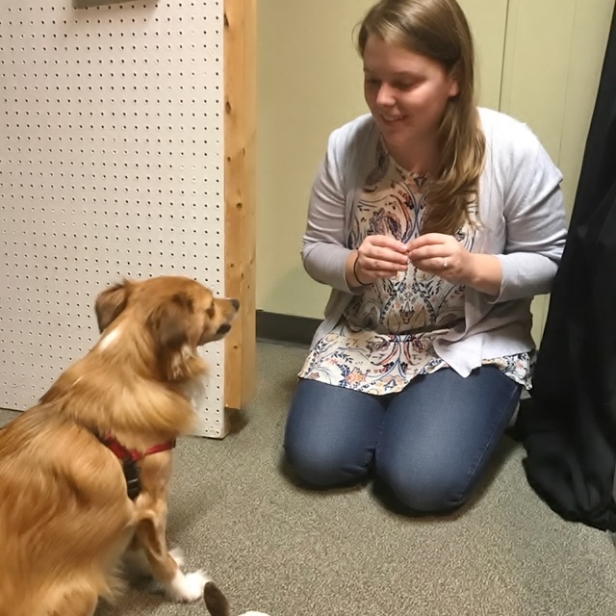 This finding shows that perhaps lateralization of sounds is not the unique feature that leads to human language, but instead is something that evolved earlier and can be used to connect sound sequences to meanings. If lateralization doesn’t make humans unique, what does? Perhaps both the benefits of lateralization and other strong skills, like a high memory capacity, may combine with humans’ unique social structure and our need to communicate and interact to allow us to develop language. This could be the next avenue of testing to discover why humans are the only animal to develop such a complex linguistic system.

Amritha Mallikarjun is a doctoral candidate in the Neuroscience and Cognitive Science (NACS) program at the University of Maryland. Her broad research goal is to facilitate the acquisition and retention of a second language in adult speakers through examination of language skills used by bilinguals and heritage speakers. She works with Dr. Rochelle Newman and Dr. Jared Novick in the department of Hearing and Speech Sciences.

One thought on “What Dogs Can Teach Us About Language”

Brought to you by the TERPS at the University of Maryland, HESP InTERPretation is for researchers and clinicians in Communication Sciences and Disorder (CSD) to share their interests, curiosities and questions.